A big cold beer needs a big cold drink. Unfortunately the best cold beer is no longer VIC. Australia’s National Tradies Health Week could not come at a more important time, with the need for national solidarity in support of the industrial action taking place at the Abbottsford Brewery in Victoria.  Workers, their families and their unions can be seen picketing outside the Abbottsford Brewery due to the decision of Carlton and United Breweries (“CUB”), the beer giant responsible for VB, Carlton Dry, Pure Blonde and Carlton Draught, to sack their unionised workforce.

CUB is owned by SAB Miller, a multinational beer giant which made $4.4 billion in profits last year. However instead of attributing their success to the workers who produce their star products, in June 2016 CUB sacked thirty-two AMWU fitters and twenty-two members of the ETU, and replaced them with a non-unionised workforce.  Not long after being sacked workers were invited to reapply for their jobs at a 65% cut in wages and conditions with another contractor, Programmed.  The sacked workers can be seen picketing outside the Abbotsford brewery and will continue to do so in the face of a replacement labour force bussed in and out of the site in front of picketing workers.

Public outrage has seen calls for boycotts of Australia’s iconic beer labels owned by CUB and these calls have gained momentum. Sacked workers have handed out 10,000 stubby holders shaming CUB’s actions to daily commuters in Melbourne. In addition AMWU members in Brisbane have handed out leaflets at NRL Broncos and AFL Lions matches. Some local pubs in Melbourne have also stopped serving CUB products in support.  Due to these efforts amongst many others, Australia is listening.  It has been alleged by the AMWU that the production of cartons at the brewery has decreased from 1.2 million per week to 385,000 which is poor news for CUB, especially in the lead up to the season of football finals and the start of the A-League.

How can you help?

Join the fight to reinstate the workers by following these steps: 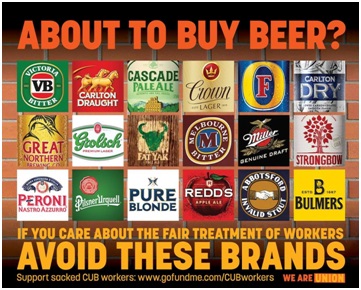 Next time you go to the local pub or bottle shop support the 55 Australian workers CUB sacked in favour of a non-unionised workforce. This small action if taken by many can have big consequences for a beer giant such as CUB.  As Steve Dargavel, Victorian State Secretary of the AMWU has stated, “it’s becoming apparent to Programmed and CUB that they have hit a raw nerve among working people, their own market…”