The evening celebrated the District Court and its achievements throughout the past 50 years. The Turner Freeman Perth office was proud to attend the event with over 600 members of the legal profession celebrating the night together.

The evening began with a moving and respectful Welcome to Country led by Dr Richard Walley OAM acknowledging the Traditional Custodians of the land. Guest speakers also presented throughout the night including the Chief Judge of the District Court, Her Honour Judge Julie Anne Wagner and various Judges of the District Court. Her Honour addressed the broad range of matters which the District Courts hears including workers’ compensation, benign asbestos matters and criminal matters. A video montage was also played which commemorated how the District Court has adapted and evolved in the past 50 years.

We would like to thank Jo Morris from Reflections and Tom Nolan, Industrial Officer from the United Professional Firefighters Union on Western Australia for attending the event alongside the Perth office.

Jo runs a mesothelioma support group aimed at providing emotional, social and peer support for asbestos disease suffers and their families. Jo’s passion stems from her father and Reflections founder, Barry Knowles who suffered from mesothelioma. Jo is also an advocate for education regarding the risks of asbestos exposure within our community. Turner Freeman is pleased to work alongside Jo supporting suffers of asbestos disease.

Tom works alongside Tim Kucera, Secretary of the United Professional Firefighters Union of Western Australia which supports Western Australian firefighters. Turner Freeman is proud to represent a Union which is so focused on advocating for the rights, health, safety and wellbeing of its members.

The evening concluded with dancing. A fun night was had by all. 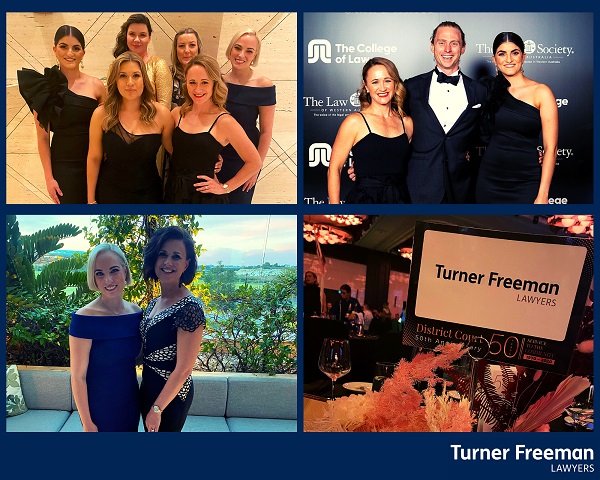