The Full Court of the Supreme Court of South Australia has rejected an appeal by James Hardie against a precedent-setting asbestos compensation claim, unanimously finding that the company owed the public a duty of care to warn them of the risks posed by in-situ asbestos cement products.

Mr Werfel, 44, who lives in Adelaide’s northern suburbs with his wife Jenny and three daughters, was diagnosed with mesothelioma — a terminal cancer caused by asbestos exposure — after discovering a lump in his groin in 2017. He has subsequently undergone multiple major surgeries, along with aggressive rounds of radiotherapy and chemotherapy.

He was first exposed to asbestos as a teenager, while working for a fencing contractor after leaving school. He was subsequently exposed during home renovations, including when he sanded and painted the walls of his first home in Adelaide’s northern suburbs, which he didn’t realise were constructed from asbestos cement sheets.

Mr Werfel welcomed the Full Court decision, saying he hoped it would finally force James Hardie to undertake the extensive public health campaign needed to ensure all Australians were aware of the risks posed by asbestos products.

“I’m extremely thankful for this outcome, which will at least provide financial security for my wife and children when I am gone,” Mr Werfel said.

“Compensation doesn’t make up for the decades of life I have been robbed of by James Hardie’s negligence. I will miss out on so many important milestones that most people take for granted, such as seeing my daughters grow up and have families of their own.

“This case was never about me. From day one we were fighting on behalf of everyone across Australia who continues to be unknowingly exposed to James Hardie’s deadly asbestos products in their homes, workplaces, and schools.

“The Full Court unanimously shared our view that James Hardie owed the community a duty of care to run an extensive public health campaign warning of the ongoing risks posed by their asbestos products.

“My hope is that the lasting legacy of my legal battle will be James Hardie finally taking responsibility for their past actions and devoting the millions of dollars needed to get the message out to every Australian about the asbestos risks that continue to lurk in the community.

“If I can prevent even one other person from contracting a deadly asbestos disease, this legal fight will have been worth all the energy we put in.”

Mr Werfel’s solicitor, Turner Freeman Lawyers partner Annie Hoffman, said the case would have far reaching consequences for anyone who contracts mesothelioma as a result of undertaking home renovations.

“This judgment has significant and far-reaching implications for ‘third wave’ asbestos victims, those exposed to asbestos products that still remain in millions of homes, workplaces, and public buildings,” Ms Hoffman said.

“The decision extends James Hardie’s legal liability beyond the products they sold to end users to all those who may come into contact with those products in future, including those who are still being exposed during home renovations.

“The Full Court confirmed that James Hardie had a duty of care to the public to warn them of the ongoing risks posed by their asbestos products, and remains legally liable for the lives those products continue to destroy.

“This decision sets a precedent for any person who contracts mesothelioma due to drilling, sanding, cutting or handling James Hardie asbestos cement in their homes.

“The court unanimously agreed with our argument that James Hardie had an obligation to run a public awareness campaign to warn the Australian public about what these products look like, where they are found, and what to do to avoid asbestos exposure.

“Sadly, James Hardie’s asbestos cement building products can still be found in homes, schools, workplaces, and public buildings, built before 1983 where they continue to pose a significant threat to public health, with many still at risk of being unknowingly exposed to this deadly fibre.” 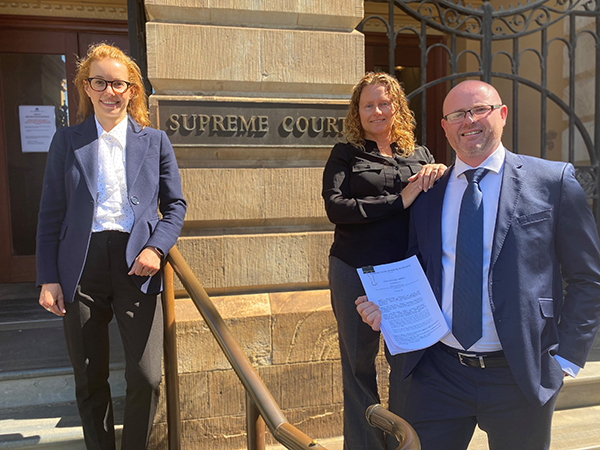