Turner Freeman in the community 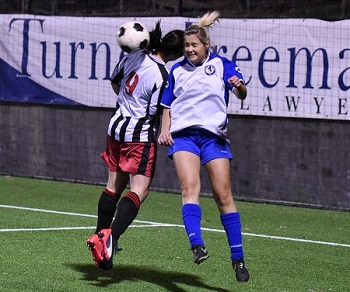 Turner Freeman Lawyers have been a great supporter of community football for a long period of time. We have had a close association with the Canterbury District Soccer Football Association (CDSFA) and in more recent times with the Macarthur Association. We value the contribution that we are able to make to community sport. Our lawyers and staff contribute as volunteers and the firm makes a financial contribution to football at a local level.

On Sunday the 30 August, the women’s premium league final was held at Lambert Park Leichhardt. The game was played between Hurlstone Park and Leichhardt Saints, won by the Saints, 2-1. The above photo shows some of the action in what was a wonderful game of women’s football.

This year, Turner Freeman enters its third season of sponsorship with the Western Sydney Wanderers. The firm have introduced the Wanderers to the CDSFA with the intention of promoting community football initiatives, working particularly with children from low socioeconomic backgrounds. Turner Freeman is proud to announce the collaboration of the Wanderers with the CDSFA community as a positive tie between community and professional level football.