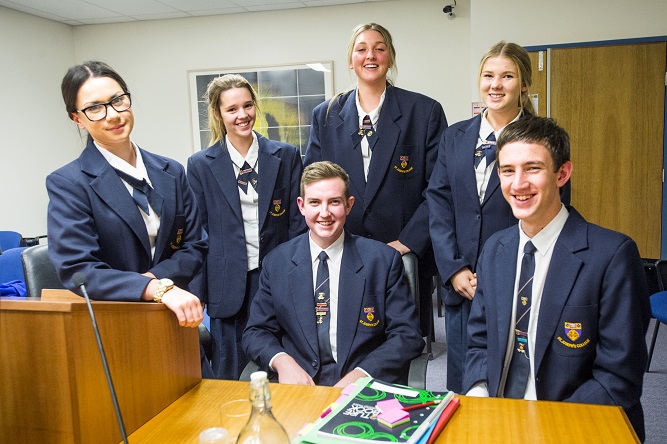 The moot presented to the teams ran as an appeal, whereby the plaintiff was awarded damages from the state government for personal injuries. Each team was given a set timeframe in which to argue this ‘moot point’ in front of the moot judges. The team scoring the most points on legal knowledge and advocacy skills won a full year’s scholarship, worth $10,080 to study law at USQ and be awarded the perpetual trophy.

The two finalist teams this year were St John’s Anglican College from Forest Lake and St Joseph’s College in Toowoomba. Both teams have been successful through three rounds of moots, and both teams had been undefeated before the Final.

Both teams performed exceptionally well, prepared and presented their arguments to the moot judges effectively and their knowledge of law was outstanding. However there could only be one winner.

Congratulations to St Joseph’s College mooting team for winning this year’s grand final. Each advocate from the winning team received a full-year scholarship to study law at USQ as well as the Turner Freeman Prize. The runner-up team each received a half-year law scholarship. The best advocate, from St John’ Anglican College, received the Best Wilson Buckley Prize.

For more information on the services offered at our Toowoomba office, contact the office on (07) 4616 8333 or via online.

Get to know our Toowoomba branch manager

Darren Whitelegg graduated from the University of Southern Queensland with a Bachelor of Laws and Bachelor of Business and since joining Turner Freeman Lawyers in 2012, Darren has worked exclusively in the area of compensation litigation.

Darren is committed to achieving the best possible outcomes for his clients and providing straightforward legal advice.

Darren is a member of the Queensland Law Society and Australian Lawyers Alliance.