If an insurer cancels your policy due to non disclosure, there are ways you can contest it and continue claiming 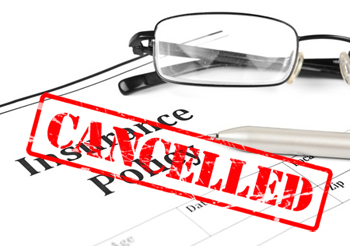 If your insurer cancels your policy because of non disclosure, you need to make sure that they are actually entitled to do so as in many circumstances this is not the case. Also not every non disclosure justifies the cancellation of the policy. If your policy has been cancelled after you made a claim, we can help you investigate the insurer to find out if they have cancelled the claim unreasonably.

An insurer to cancel a policy, they must do so within 3 years of the start of the policy, otherwise if it is longer than 3 years they must prove that the non disclosure was done intentionally, with reckless disregard for the truth and that it was fraudulent.

Below is a scenario where the insurance policy was cancelled by the insurer for supposed non disclosure.

William has taken out life and TPD insurance in 2001.  On the application form he was asked if he had ever taken illegal or non prescription drugs.  Barry answered no.  In 2012 William was diagnosed with a terminal illness and was not be able to continue working in his usual job or any other job he was qualified to do.  William made a TPD claim under his policy.  As part of the insurer’s assessment of his claim, they obtained medical records from William’s treating doctor.  In an entry more than 15 years ago the records stated that William had been a one-time user of cannabis.  When the insurer received the information his policy was cancelled due to William failing to disclose it on the application form.  The insurer stated that the non disclosure was fraudulent and if they had known about this, they would not have offered William any insurance.

William sought legal advice. His lawyers also requested a copy of the application form and guidelines relevant to the question which it was alleged had not been answered truthfully.  Those guidelines revealed that if the answer to the question was yes, then further questions would have been asked which would have revealed that William only smoked marijuana once at University at the suggestion of a friend.  In those circumstances the guidelines provided that the insurer had a discretion to still accept the policy and charge a slightly higher premium.

William’s explanation was that he had only smoked marijuana once with friends at University and after taking his first drag he did not like it and never used marijuana again.  He answered no because he had forgotten about ever using it given it was such a brief encounter.

In these circumstances it is highly likely that the insurer would have failed in the attempt to cancel the contract, because they have offered the policy anyway and William’s answer was in fact not reckless or dishonest and most likely the same as what any other reasonable person would have done in William’s circumstances.

(This scenario is fictitious and is provided as example only)