On 26 May 2017 His Honour Judge Gilchrist of the District Court of South Australia handed down judgment in the matter of Latz –v- Amaca Pty Limited (formerly James Hardie & Coy Pty Limited). Mr Latz was represented by Turner Freeman partner, Annie Hoffman. He was diagnosed with mesothelioma in October last year. He had previously been exposed to asbestos whilst building a fence using “Super Six”, a corrugated asbestos cement sheet manufactured by James Hardie, in about 1976 or 1977. Mr Latz had spent most of his working life working for the State Government as a survey draftsman. As a result he was entitled to a State pension until his death.  Mr Latz claimed damages which included the loss of his pension entitlements given that his life will be cut short as a result of his mesothelioma. In addition, Mr Latz claimed exemplary damages pursuant to Section 9(2) of the Dust Diseases Act 2005 (SA).

“The significance of the evidence of James Hardie’s state of mind from 1938 onwards is that it establishes that by about 1976, when it harmed Mr Latz, it was well aware that he was at some risk of dying as a result of the use of its product. It was well aware that there were precautions that he, as an end user, could implement to reduce that risk. It failed to give him any warnings or advice about precautions and its failure to do so was motivated by its thirst for profit which it valued ahead of his safety.“

Judge Gilchrist then awarded an amount of $30,000 by way of exemplary damages.

Mr Latz was awarded the total sum of $1,000,062. This is the largest award that has been made in any asbestos case in South Australia.

For further advice about the judgment, do not hesitate to contact Annie Hoffman of our office on 08 8213 1000. 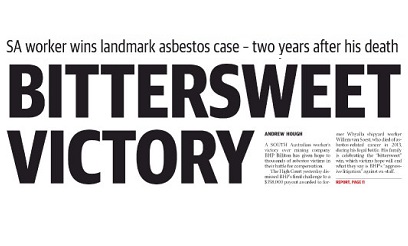 For more information regarding the judgment, please click on the image below:

Further media articles on this judgment are below: