An Adelaide man has been awarded a record compensation payout of $3,077,187 after being diagnosed with a rare form of mesothelioma — an aggressive and incurable cancer — caused by exposure to asbestos dust, including during renovations on his first home.

The South Australian Employment Tribunal judgment has significant implications for “third wave” asbestos victims — those exposed to in-situ asbestos products in homes, workplaces, and the community – finding that James Hardie had failed to properly warn the public about the ongoing risks posed by their asbestos cement products.

“This landmark judgment is not only significant because it has awarded an Australian-record for asbestos compensation, but because it highlights the failure of James Hardie to warn home renovators and others of the ongoing risks posed by asbestos products,” Ms Hoffman said.

Mathew Werfel, 42, who lives in Adelaide’s northern suburbs with his wife Jenny and three daughters, aged 10, 7 and 6, was diagnosed with the terminal cancer after discovering a lump in his groin in 2017. Since then he has undergone multiple major surgeries, along with aggressive rounds of radiotherapy and chemotherapy.

Mr Werfel was first exposed to asbestos as a teenager, while working for a fencing contractor after leaving school. He was subsequently exposed during home renovations, including when he sanded and painted the walls of his first home in Adelaide’s northern suburbs, which he didn’t realise were constructed from asbestos cement sheets.

In addition to awarding compensation for pain and suffering, future economic loss, medical expenses, and loss of life expectancy, Judge Leonie Farrell imposed exemplary damages on the company, saying the court needed to issue a deterrent for corporate actions that put commercial gain ahead of people’s lives.

“[James Hardie] breached its duty of care to a large class of Australians, of which Mr Werfel was a member,” Judge Farrell said. “The magnitude of the risk of members of this class contracting mesothelioma was vast. The consequences of the risk were the deaths of many Australians.”

Judge Farrell also highlighted James Hardie’s failure to properly warn the public of the risks still posed by its products, saying the company “did so purely for commercial gain”. “Part of the conduct complained of in this case, however, is still occurring, that is the lack of warning to the general public concerning the ongoing risk of the dangers of [James Hardie’s] product in thousands
of Australian homes,” she said.

Mr Werfel welcomed the outcome of the case, but said he feared many home renovators were still being unknowingly exposed to asbestos products. “On the one hand, this outcome is a great relief, knowing that my family will be taken care of,” he said. “It is great to have a judge look at the facts and say that yes, they had a duty of care to me, they breached that duty, and the result was me getting this terrible disease.

“But it’s heartbreaking to think how many people continue to be exposed, without their knowledge, to asbestos in their homes and workplaces.

“The company should be running a massive public awareness campaign that lets people know just how much of these asbestos products are still out there, what to look out for, and how to stay safe around the home.

“They need to take responsibility for their past actions, not just by compensating victims, but taking every step possible to stop other Australians from being exposed to asbestos.” Mr Werfel’s solicitor, Turner Freeman Lawyers partner Annie Hoffman, said James Hardie had been the primary manufacturer of asbestos building products in South Australia, which can still be found in
thousands of homes and workplaces.

“This case confirms that James Hardie’s duty of care didn’t end when it sold those products, it continues even decades later as tradespeople, homeowners, and others are exposed to those building materials.

“The decision to also award exemplary damages — an additional punishment aimed at sending a message of deterrence — highlights the court’s view that James Hardie has an ongoing duty of care to properly warn the public about the dangers of in-situ asbestos products.”

Annie Hoffman featured on the 7.30 report – click on the image below to watch the feature. 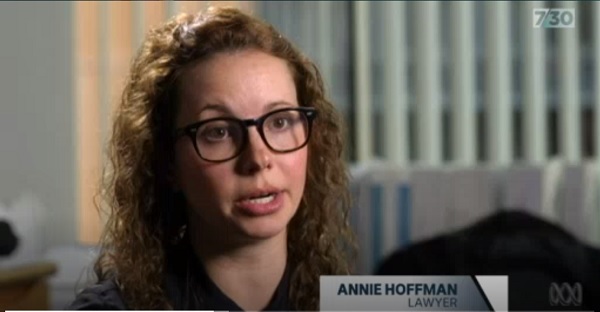