Turner Freeman’s moment in the spotlight 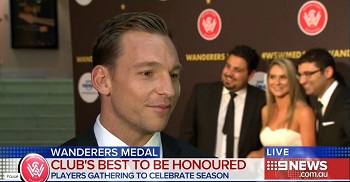 Hundreds frocked up and gathered at the Qudos Bank Arena on Wednesday the 3rd of May to celebrate the Western Sydney Wanderers Medal evening. The night was based around the achievements of the club and it’s players throughout the 2015/16 season. The Wanderers fought hard during the season to make the grand final, with a triumphant win against Brisbane Roar in the semi final. The third grand final appearance for the team unfortunately ended in defeat by the home side, Adelaide United.

Among the many were three Turner Freeman representatives, partner Richard Dababneh, senior associate Fady Dous and marketing assistant Alexandra Gardiman (pictured above). Our team was caught live on camera during the channel 9 news interview with Brendon Santalab, who was the rightful winner of the Golden Boot award for the most goals scored throughout the season.

Among the winners of the night was National Sports Football Club president Youcef Kabbara, who received the Chairman’s award. Humble and most rewarding, Youcef received this award for his ongoing contribution to the soccer community of Western Sydney, through a significant increase of players throughout the 2015 season. Youcef’s dedication and passion is shown in his continual promotion of the sport and his club throughout all channels.

A significant driving force between the Western Sydney Wanderers club and the Canterbury District Soccer Football Association, was Turner Freeman’s managing partner Armando Gardiman. He has successfully brought the club and association together for community events, to attract adults and children within Western Sydney to enrol and play football. Several events were held throughout the season by the CDSFA and were sponsored by the WSW club.

Now as the club prepares for its 2016/17 season, Turner Freeman enters its fourth year of sponsorship. We are immensely proud of the club and all the players’ achievements throughout the previous season, and hope to see the rightful owners of the premiership bring the trophy home to Western Sydney!