40 years ago today Armando Gardiman AM began his legal career at Turner Freeman and has put his heart and soul into the business. In the words of Anne who has been by his side for nearly 35 years, “He is a brilliant lawyer and fierce litigator, his opponents fear him but his clients love him and more importantly he is a man of integrity, high moral values and has a very good heart.” Congratulations on 40 very successful years! 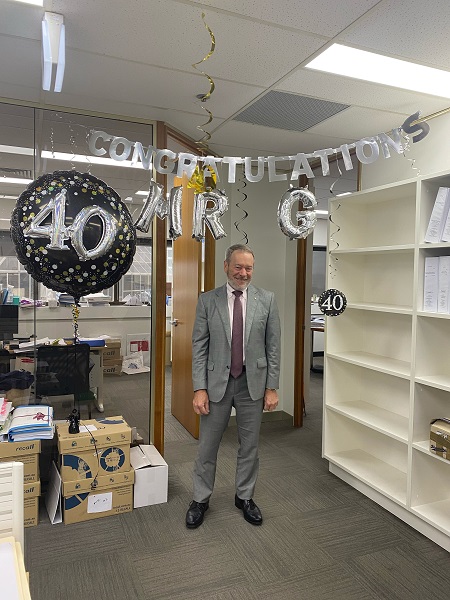 Read the full speech and presentation below:

40 years ago today Armando Gardiman AM began his legal career at the offices of Turner Freeman Solicitors which were then located in the P&O Building @ 2 Castlereagh Street, Sydney. At that time we only had one office.

Armando completed his law degree at UNSW, and commenced his employment at TF on 16 December 1980.

His legal career at TF is long and distinguished. He started practising in the area of general personal injury even though I believe he had aspirations to be an industrial relations lawyer. Throughout his career he has practised in criminal law, entertainment law and construction law.

However, very early in his career he started practising in the area of asbestos litigation where he is now recognised as a preeminent specialist in this area of law.

I am not going to bore you all with the details of his accomplishments throughout his legal career because there are way too many to mention, but there are some which shouldn’t go unmentioned :-

He also had a vision for a research institute where he prepared submissions on behalf of NSW Unions and ADFA to establish a dedicated facility for research into asbestos related diseases.  The Asbestos Diseases Research Institute was formed in early 2000.

There are countless others, but I think if you were to ask him what his greatest legal accomplishments are he would respond with “knowing’ that I have helped thousands of plaintiff s ensure that they have been able to provide a future for their families who they leave behind”.

I started working for Armando in June 1987 in the Sydney office when one day he asked me “how would you like to work at Parramatta”?  Being a Western Sydney girl born and bred, the thought of travelling half the distance was of course very appealing, so in January 1988 the Parramatta office was opened.

Many of you have heard the stories of the setup of this office but can I just say it is probably some of the most memorable moments of my time at TF, in a very good way.

Armando always had a vision for growth of the firm and I believe that it is because of him that the firm is where it is today.  We now have 19 offices around the country.  Wollongong and Newcastle opened not long after Parramatta and then our first interstate office opened in

May 1999 when we opened the Brisbane office. He, then realised we needed to be in SA, so in 2001 we opened our office in Dulwich, South Australia.

Campbelltown and Penrith have now formed part of the growth of Western Sydney and I don’t think he will be stopping there!

40 years is quite an achievement and I am sure he has blue blood running through his veins. I have had the privilege of working alongside him for nearly 35 years, Kerry for around 25 years. He has put his heart and soul into Turner Freeman and where he is in his career, he should be slowing down and enjoying his time on his farm, he is still carrying a full case load and managing the firm.

He is a brilliant lawyer and a fierce litigator, his opponents fear him but his clients love him but more importantly he is a man of integrity, high moral values and a has a very good heart.